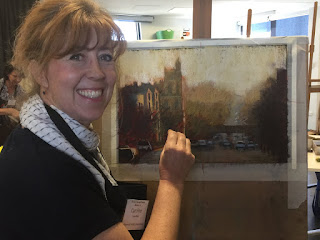 Welcome to My Blog

Through my pastel paintings I hope to show my audience how there can be real beauty in the mundane.   I enjoy painting everyday scenes, that we may pass by without consideration, and that we often take for granted. I hope to enable others to see the world as I do, taking time to see beauty in the familiar.  Degas is known to have said “art is not what you see but what you make others see”.
The discovery of pastels in 2013 began a new chapter in my artistic life.  The immediacy, intensity of colour and luminosity of the pastel medium, I have always found irresistible.
Presently I am occupied by the play between light and shadow and experimenting with underpainting. Still life, long grass, trees laden with autumn leaves and reflections on water are my current obsession.
Since 2013 I have been keeping busy fulfilling duties as a committee member for The Pastel Society of Victoria, Australia (PSVA).
I enter exhibitions held in Melbourne as time allows and I have won several awards.

Thank you for taking time to explore my paintings.  Enjoy!


Achievements in My Artistic Life