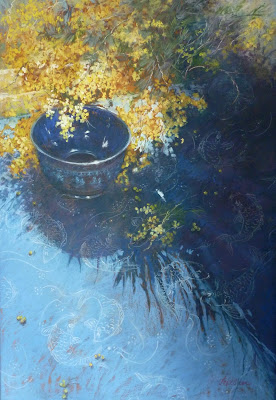 
Australia Native Wattle in it's numerous varieties is out in abundance this time of year (Winter).  Although this painting is mostly blue, in truth I have painted it in celebration of the wattle.  The blue bowl was purchased especially to complete my composition.  I had more china in the composition initially but when the shadow pattern emerged I felt the other pieces were surplus.  What a terrific pattern the light made.  That soon became my focus.  Inspiration for the table cloth came from a piece of wrapping paper that I found recently.  It has white fish swirling all over an indigo background.  It reminds me of a Japanese print.
Posted by Aylesbury Art at 05:30